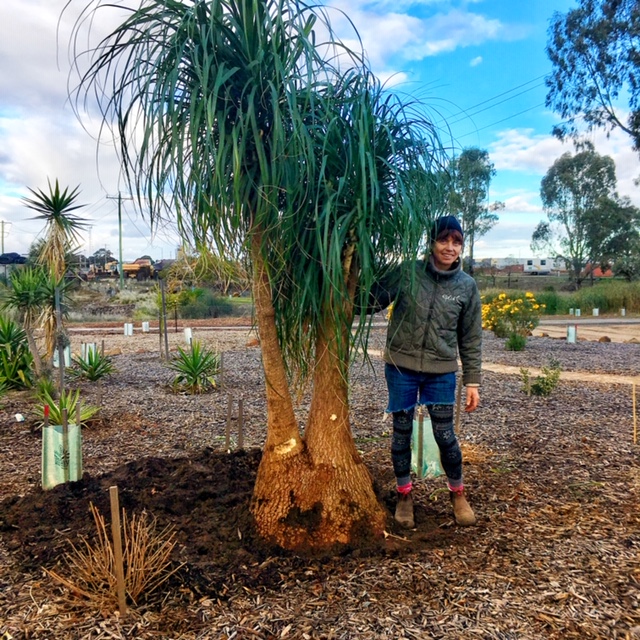 I recently donated a huge and much loved ponytail palm from my garden to the Friends of the Melton Botanic Garden (FMBG).  Ponytail palms Beaucarnea recurvata are not actually palms, rather they grow in a palm like shape, and are native to the deserts of Eastern Mexico. Although ponytail plants are not edible, I have always loved their wacky Dr. Seuss silhouette and have visited them in Botanical Gardens all over Australia.

This plant has been a much loved member of the Gunyah garden, growing for the last 20 years under the “Weeping Wandin Pride“ apple tree outside the back door.  We had cut the top growth off several times to try to keep the plant at a size that would fit under the apple tree and we also did this to produce a more handsome multi-trunked plant.  However if you have ever seen the enormous ponytail plants in the Adelaide Botanic Gardens, you will know that this plant could not stay in my garden forever!

Kieran spent a day carefully trenching around the roots, and the next day Engineer John and Kieran winched the ponytail out of the ground, off the beam Karen’s dad (yet another John)  had supplied for the top of the house, which has proved to be extremely useful.  Our neighbour Aaron helped maneuver the giant ponytail out of the back garden and into the trailer. (Two more neighbours and another winch off the garage were needed at this point.)  90 minutes of driving at 50 km/h to Melton and we met John Bentley, who had pre-dug a hole in the new Californian, Central and Southern American bed where the ponytail is now the major feature.  I look forward to visiting my plant in it’s new home!