What a cute little beetle, but is it friend or foe? 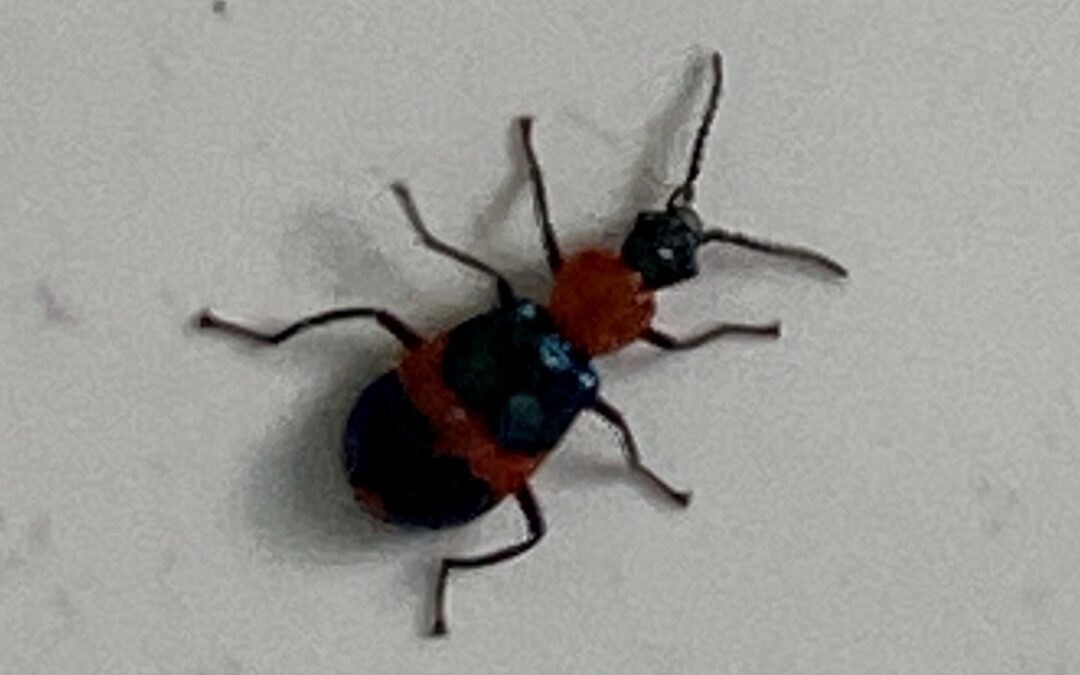 There are so many interesting and colourful bugs in our gardens and in our countryside, but it’s hard to know when they are something to be appreciated or feared. I know when I find a cluster of beetles or unknown insects in my garden, I am usually a bit suspicious, and I tend to take the attitude that they are guilty until I can prove them innocent, even if I also find them beautiful and intriguing. On the recommendation of a friend, I’ve recently joined the iNaturalist online community, using an app on my phone. Once you install it on your phone, you add your pictures of the unknown insect (or plant etc.) and the app makes suggestions as the identity for you. You choose the one that looks the most similar, then upload the pictures. In a short time, others in the iNaturalist community add their observations to your pictures, either confirming or altering the identification. So, I had the idea of collecting some seeds from an unusual Hop bush in my mum’s garden, as the plant is very old and falling apart. Hmm, there’s some little clumps of the papery seeds, that’s handy. Oh dear, it seems a lot of little spiders and beetles have made homes in these clusters, setting up home before winter perhaps? No wonder these clumps stayed when the other seeds dropped! My seed collecting turned into more of a gentle spider and beetle removal, and I eventually collected a few seeds to try germinating later. There were the usual delicate green spiders you find sheltering in plants, and also some colourful red and blue beetles crawling purposefully around. What were they I wondered?

Back in Melbourne the next day, and doing some washing, I found that one of the red and blue beetles had hitched a ride in my clothes. Still not sure what it was, I took a picture and uploaded it to iNaturalist – the identification suggested, and I’m not making this up, was ‘Red and Blue beetle’, Dicranolaius bellulus, a handy beneficial insect for orchards according to an online article. These colourful little critters shine not only in appearance, but as garden friends in hotter weather, when our friends the lacewings may have reduced in population, but these tougher creatures keep going. They don’t like high rainfall and humidity, so it may have been a challenge for them to keep going this season. They are well suited to the usual Dookie climate. They are survivors, often hiding out in the bark of trees or shrubs so they can sometimes avoid pesticide damage, a useful trait in IPM, integrated pest management. They also persist when their food sources, various garden pests, reduce in numbers, unlike other predatory insects, that will eat themselves out of house and home and need to be replaced each year if you are using them as a biological control in fruit or vegetable crops or ornamental gardens. 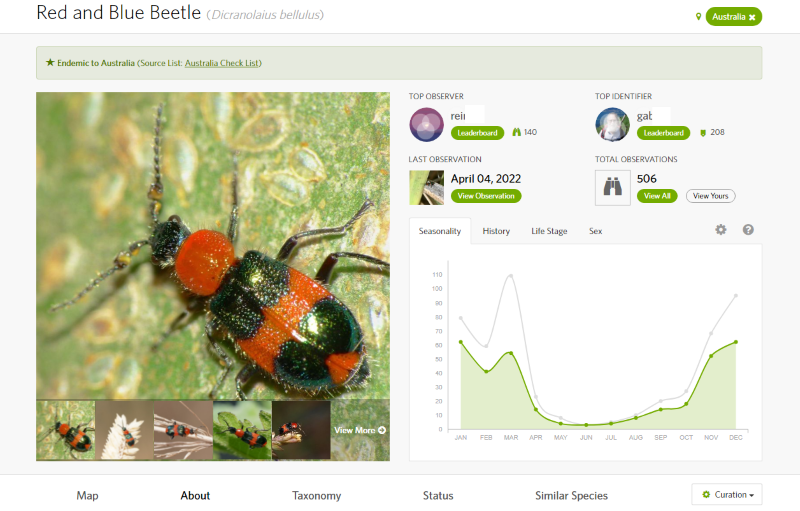 One such example of this is Persimilis and also Typhlodromus, predatory mites used to control the dreaded two-spotted mite, also known as red spider mite, but needing to be regularly introduced, as they would efficiently eat out their pest hosts. I learned to use these predator mites while working at Melbourne Zoological Gardens, as we used them in the butterfly house, where any insecticides would not only control the two-spotted mite but kill off the main exhibits! 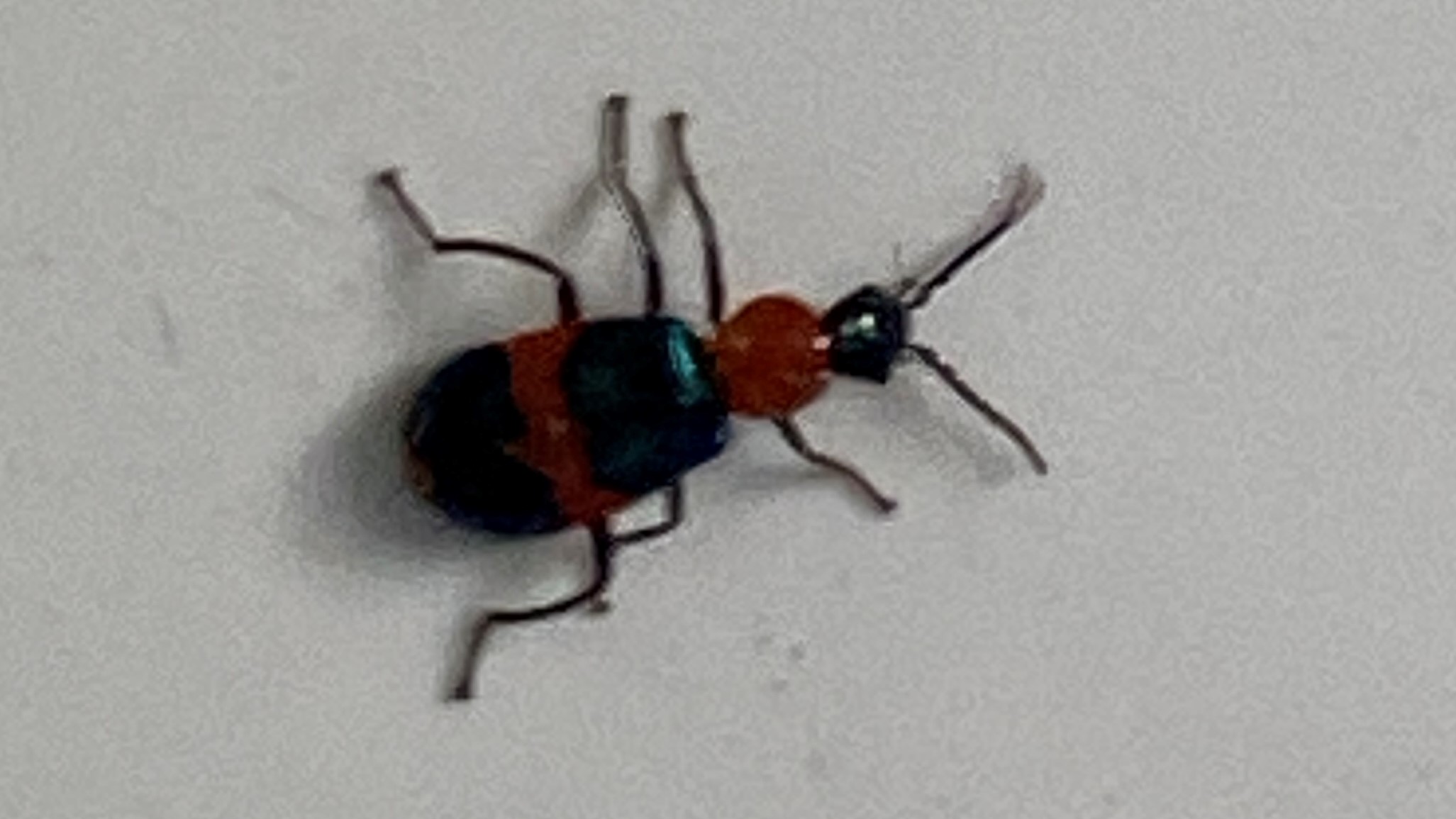 Feeling better about my new beetle friend and kind of relieved, I took her out to my back garden to an apple tree, where she might eat moth eggs, insect larvae and other small insects. I think she is a she, as she has a more rounded abdomen as opposed to the longer more slender males. Red and Blue beetles are predators of that annoying grain and tomato pest, Helicoverpa, previously known as Heliothis, also known as budworm. They also eat pollen, so I’m wondering if they may inadvertently contribute to vegetable and fruit pollination by visiting flowers?